FORM 1023-EZ: Recognition As a Tax-Exempt Organization Is Now Virtually Automatic for Most Applicants, Which Invites Noncompliance, Diverts Tax Dollars and Taxpayer Donations, and Harms Organizations Later Determined to Be Taxable

Since July 2014, the IRS has addressed inventory backlogs by allowing certain organizations to use Form 1023-EZ, Streamlined Application for Recognition of Exemption Under Section 501(c)(3) of the Internal Revenue Code. Form 1023-EZ requires applicants merely to attest, rather than demonstrate, that they meet fundamental aspects of qualification as an exempt entity — it does not solicit any narrative of the organization’s activities, any financial data, any substantiating documents, or any explanatory material.

The IRS approves 95% of applications submitted on Form 1023-EZ. However, its own pre-determination review program shows the IRS approves Form 1023-EZ applications much less frequently – 77% of the time – when it reviews documents or basic information from the applicants, rather than relying only on the attestations contained in the form. 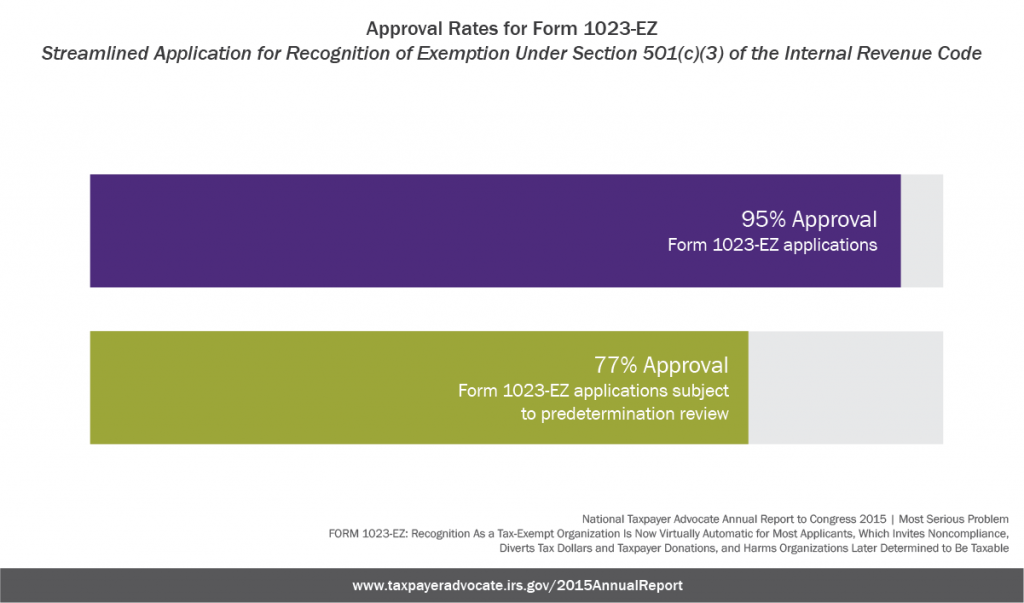 The National Taxpayer Advocate recommends that the IRS revise Form 1023-EZ to require applicants, to submit their organizing documents, unless they are corporations in states that make articles of incorporation publicly available online at no cost. Form 1023-EZ should also require applicants to submit a description of their actual or planned activities and financial information such as past and projected revenues and expenses. The IRS should make a determination only after reviewing the application and these supporting materials, and when there is a deficiency in an applicant’s organizing documents, the IRS should require the applicant to submit a certified copy of reformed articles before it confers exempt status.