Between fiscal years (FY) 2010 and 2015, the IRS’s appropriation declined by about 10% (from $12.15 billion to $10.95 billion), and its user fee revenue increased by about 34%(from $290 million to $391 million). It is considering additional user fee increases that would help fund operations. Fees that seem reasonable to the IRS may seem outrageous to taxpayers when added to the costs of recordkeeping, filing and paying taxes and paying professionals for help in navigating complicated rules and procedures that the government created. They may seem even more outrageous when combined with the IRS’s plans to reduce services it previously provided for free, shifting more tax compliance burdens to taxpayers.

A fee may combine with other burdens to make taxpayers lose interest in trying to comply. For example, the IRS increased the fee for a taxpayer to set up an installment agreement from $105 to $120 in 2014, and is considering additional increases. If this fee discourages taxpayers from making arrangements to pay, then it:

The IRS should update the Internal Revenue Manual to require that IRS departments avoid fees that would have significant negative effects on taxpayer burden, the IRS’s mission, voluntary compliance, or taxpayer rights.

To ensure the IRS’s analysis is informed, it should estimate the effects of any proposed fee, publish its estimate along with a detailed explanation showing the basis for it, and address any comments from stakeholders. 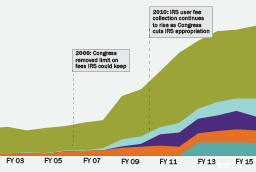