Every year, the National Taxpayer Advocate’s (NTA) Annual Report to Congress identifies at least 20 of the nation’s most serious tax problems. These issues can affect taxpayers’ basic rights and the ways they pay taxes or receive refunds, even if they’re not involved in a dispute with the IRS. As your voice at the IRS, the NTA uses the Annual Report to elevate these problems to Congress and the highest levels of the IRS, and to recommend solutions.

The Taxpayer Advocate Service (TAS) first identified many of the issues in this report when large numbers of taxpayers couldn’t resolve tax-related problems and came to TAS for help.

The U.S. tax system is built on voluntary compliance. Voluntary compliance is much cheaper than enforced compliance, because the government does not have to spend money to collect amounts that are voluntarily paid. Taxpayer rights are central to voluntary compliance. If taxpayers believe they can be treated in an arbitrary and capricious manner, they will mistrust the tax system and be less likely to comply with the laws voluntarily. If taxpayers have confidence in the fairness and integrity of the tax system, they will be more likely to comply.There are dozens of discrete taxpayer rights scattered throughout the Internal Revenue Code, but they are not organized or presented in a coherent way. Just as the U.S. Constitution’s Bill of Rights is organized and presented in a manner that U.S. citizens and the government itself can understand and respect, a Taxpayer Bill of Rights would serve the same function in the realm of taxation. A thematic, principle-based list of core taxpayer rights would serve as an organizing principle for tax administrators in establishing agency goals and performance measures, provide foundational principles to guide IRS employees in their dealings with taxpayers, and provide information to taxpayers to assist them in their dealings with the IRS.

“The National Taxpayer Advocate recommends that the IRS adopt and promote a Taxpayer Bill of Rights, and actively apply its principles to all IRS strategic planning, compliance and taxpayer service activities, and to outreach and education. Doing so will ensure taxpayers know their rights, enable them to avail themselves of those rights, and restore trust in the tax system.”

In fiscal terms, the mission of the IRS trumps the missions of all other federal agencies. If the IRS lacks adequate funding to do its job effectively, the government will have fewer dollars to fund federal programs.

Since FY 2010, the IRS’s workload has grown, and its budget has been reduced by 8%. The combination of more work and less funding has predictably impaired the IRS’s performance. Last year, for example, the IRS could only answer 61% of customer service calls, and those who got through had to wait nearly 18 minutes on hold.

The requirement to pay taxes is generally the most significant burden a government imposes on its citizens. The National Taxpayer Advocate believes the government has a practical and a moral obligation to make compliance as simple and painless as possible. The report also presents research studies showing that top-quality taxpayer service has a significant influence on tax compliance.

The IRS is the federal government’s accounts receivable department and generates a substantially positive return on investment. In FY 2013, the IRS collected $255 for each dollar it received in appropriated funds. It is therefore self-defeating to treat the IRS like a pure spending program in which a dollar spent is simply a dollar spent. With the IRS, a dollar spent generates many dollars in additional revenue and thus helps to reduce the budget deficit.

Budget cuts and sequestration have led the IRS to cut its overall training budget by more than 85% and training hours for key employees by up to by 89% since fiscal year 2009. Most of the IRS operations that work directly with taxpayers had their training curtailed even more that the agency as a whole. The IRS has cut its training and education programs to a bare minimum without considering the type of training employees need to perform basic job functions, protect taxpayer rights, and prevent harm and burden for taxpayers.

IRS employees must administer a complicated, ever-changing set of tax laws that are difficult to interpret and apply. A workforce without proper (or any) training in how to perform core job functions cannot serve taxpayers. Taxpayers are harmed when they can’t contact the IRS and receive prompt, accurate replies to their inquiry, or have their accounts correctly resolved. The IRS cannot continue to meet budgetary obligations at the expense of training employees. 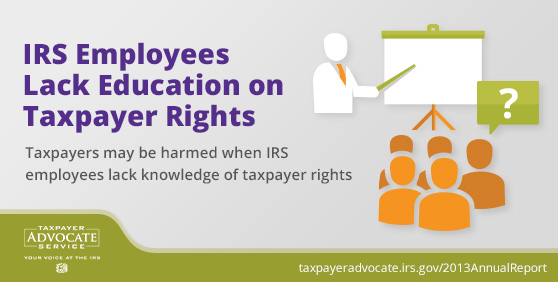 The Internal Revenue Code guarantees taxpayers certain rights. However, many taxpayers are unaware of them, and IRS employees do not always communicate them at the right times. A recent nationwide survey found only 46% of U.S. taxpayers believed they have rights before the IRS, and only 11% knew what those rights were. This lack of awareness is compounded when IRS employees themselves don’t sufficiently understand taxpayer rights.

Many IRS employees receive only minimal training on taxpayer rights. Not all are given initial training on the subject, and the information is not regularly reinforced in later training. The IRS frequently relies on the Internal Revenue Manual to educate employees, but it often tells them to take a specific action without explaining the underlying taxpayer right or rights.

The IRS should provide employees with an overarching, comprehensive education about taxpayer rights, as well as training and guidance about how those rights apply in specific situations. Employees need a framework that shows them where fundamental taxpayer rights arise in their daily work and helps them communicate these rights to taxpayers.

“Without comprehensive training on taxpayer rights, employees may continue to make poor decisions that harm taxpayers.” 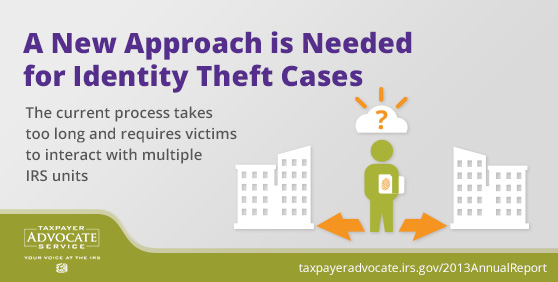 Tax-related identity theft wreaks havoc on the lives of its many victims, who must deal with the IRS for months or years to untangle their account problems. To its credit, the IRS has recognized identity theft as a major challenge, but still takes much too long to fully unwind the harm suffered by identity theft victims and issue refunds to the legitimate taxpayers.

The IRS’s current approach to helping ID theft victims requires coordination among over 20 different units, allowing too many victims to fall between the cracks. The IRS must recognize that identity theft is a traumatic crime whose victims require one-on-one assistance. The IRS should set up a centralized unit, similar to the one that helps taxpayers who are victims of domestic abuse. The IRS should assign one person within the centralized unit to work with each victim until the IRS has done everything possible to resolve the taxpayer’s account. 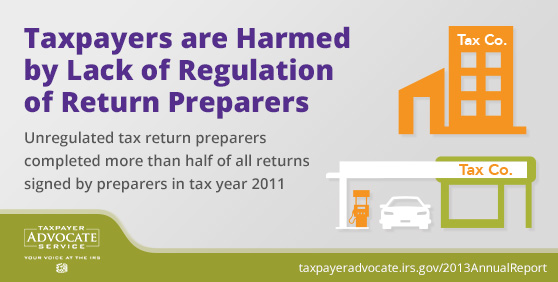 In tax year 2011, 42 million tax returns were prepared by unregulated tax return preparers. Because preparers play a critical role in tax administration, the IRS must ensure that they are competent, visible, and accountable. However, the Taxpayer Advocate Service has witnessed widespread problems with competence and ethical standards in the tax preparation industry.

Since 2002, the National Taxpayer Advocate has advocated for a system to regulate preparers. The IRS had developed competency requirements, but in Loving v. Internal Revenue Service the District Court enjoined the IRS from enforcing the testing and continuing education elements of the program. Unless this ruling is overturned on appeal, taxpayers will still find themselves in a world where anyone can hang out a shingle as a “tax return preparer” with no knowledge or experience needed. Until the courts decide the IRS has authority to regulate preparers, the National Taxpayer Advocate urges the IRS to adopt a servicewide return preparer strategy to protect the best interests of taxpayers and tax administration.

“Without any regulation, we will continue to see a proliferation of return preparers showing up at check-cashing places, pawnshops, used car dealerships, furniture stores.” 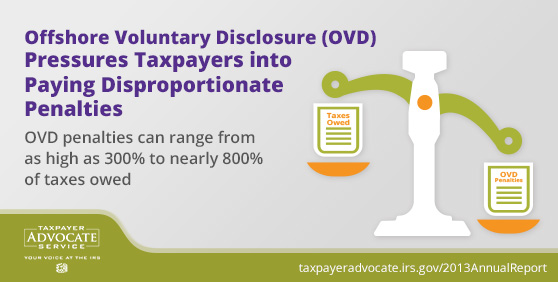 Many people fail to report offshore income and file related information returns for a wide variety of reasons. With few exceptions, the IRS requires them to “opt into” a punishing offshore voluntary disclosure settlement program. The combination of the reporting statute and the way the IRS administers it creates the potential for such harsh penalties that some taxpayers agree to pay unwarranted amounts to avoid the penalties.

The median penalty paid under the 2009 program by taxpayers who had the smallest accounts, and did not have legal representation, was nearly eight times the unpaid tax. It was also disproportionately greater than what the IRS extracted from those with the largest accounts; they paid a median of about three times the unpaid tax. Thus, the IRS has extracted the most extreme penalties from unrepresented taxpayers with small accounts who were voluntarily trying to correct a mistake.  By contrast, IRS data suggests that those who don’t try to comply often remain undetected. Yet the IRS’s audit rate with respect to foreign financial account reporting is less than 0.25%.

“The National Taxpayer Advocate has offered many common sense recommendations that would bring taxpayers into compliance and help restore confidence in the IRS, but IRS has not fully adopted them.” 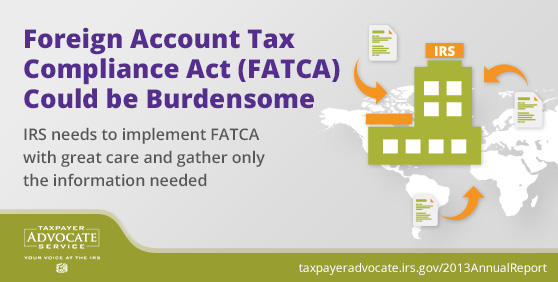 FATCA, the Foreign Account Tax Compliance Act, seeks to reduce the loss of revenue on accounts held abroad. It imposes a wide range of reporting obligations, along with potential sanctions on U.S. taxpayers, foreign entities, and withholding agents. FATCA will not be fully in place until 2017 at the earliest. However, questions remain about whether the information being compiled is necessary and will be effectively used, the enforcement benefits of FATCA justify the compliance burdens and economic hardships it imposes, and the program will preserve taxpayers’ right to due process.

The National Taxpayer Advocate is concerned that the program may not be able distinguish “benign actors” who make innocent mistakes from “bad actors” who are trying to hide their income. Taxpayers could face consequences because of lax procedures or standards by foreign financial institutions in collecting and transmitting account data. The IRS also has been slow in acting upon recommendations well-informed stakeholders.

“The National Taxpayer Advocate cautions the IRS to gather only the information that it will actually use, to learn from its experiences…to more effectively preserve the due process rights of taxpayers, and to burden impacted parties as little as possible.” 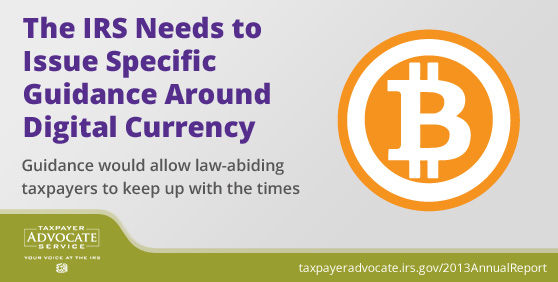 The use of digital currencies, such as bitcoin, is growing. Between July and December, 2013, bitcoin usage increased by over 75% – from about 1,700 transactions per hour to over 3,000. In the same period, the market value of bitcoins in circulation rose from about $1.1 billion to $12.6 billion. However, the IRS has yet to issue specific guidance addressing the tax treatment or reporting requirements applicable to digital currency transactions. Unanswered questions may include:

Taxpayers are speculating on the Internet about the answers to these questions. Some of this speculation is incorrect, incomplete, or misleading. It is the government’s responsibility to inform taxpayers about the rules they are required to follow. The IRS should issue guidance that addresses the tax treatment and information reporting required in connection with digital currency transactions, including answers to the basic questions listed above.

“IRS-issued guidance would promote tax compliance, particularly among those who want to comply. Moreover, it would eliminate the ambiguity that may encourage some digital currency users to avoid taxation and information reporting.“

Read All Most Serious Problems ->