IMPORTANT NOTICE: This report to Congress may currently contain some broken hyperlinks. The Taxpayer Advocate Service recently migrated our website to a new digital platform and we are currently working to repair any hyperlinks that may have been affected by the migration. We apologize for any inconvenience.

The National Taxpayer Advocate’s (NTA) Annual Report to Congress creates a dialogue within the IRS and the highest levels of government to address taxpayers’ problems, protect taxpayers’ rights, and ease taxpayers’ burden.

“The IRS absolutely needs more funding. It cannot answer the phone calls it currently receives, much less the phone calls it can expect to receive in light of tax reform, without adequate funding. But within the budget it currently has, there are plenty of opportunities for the IRS to demonstrate that it can do a better job of using creativity and innovation to provide taxpayer service, encourage compliance, and address noncompliance.”

The Annual Report to Congress includes recommendations for new federal tax laws or changes to current ones.

In 2015, Congress enacted legislation requiring the IRS to outsource the collection of certain tax debt. The IRS began assigning tax debts to private collection agencies (PCAs) in April 2017. According to the IRS, for Fiscal Year 2017 the Private Debt Collection program generated $6.7 million of payments from taxpayers, but cost $20 million. At the same time, the IRS pays commissions to PCAs on payments from taxpayers that are attributable to IRS, rather than PCA, action.

The recent returns of approximately 4,100 taxpayers who made payments to the IRS after their debts were assigned to PCAs show:

44 percent had incomes below 250 percent of the federal poverty level. 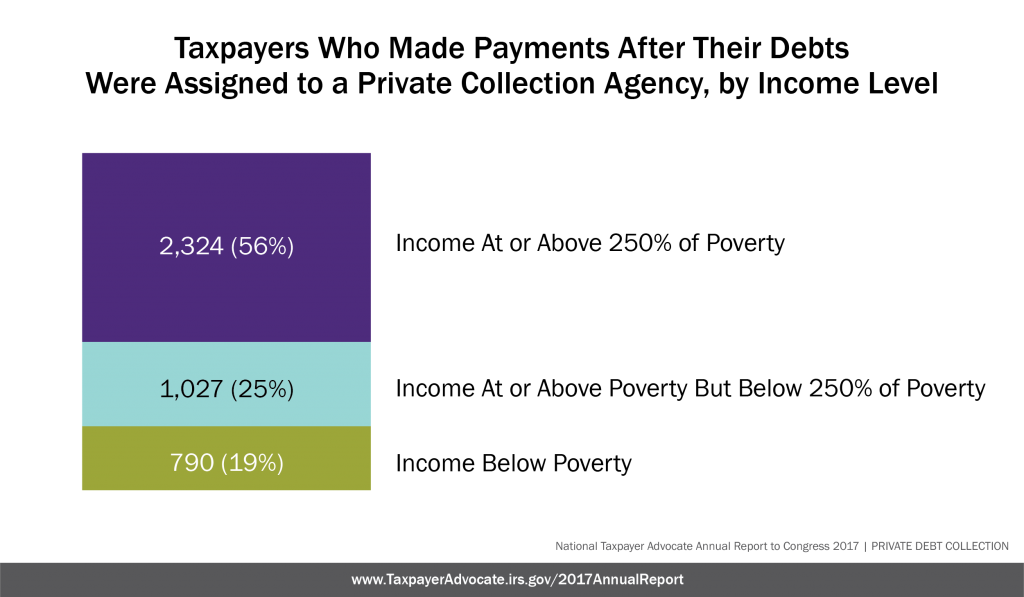 The IRS is treating its telephone operations as a dying relic of taxpayer service as it moves forward with its “Future State” plan to reduce telephone interactions with taxpayers and rely instead on more web-based services and tax practitioners. This approach allows the IRS to focus on the channels of communication it prefers, but not where taxpayers might find the best form of assistance. However, as a part of the right to quality service, taxpayers should be able to contact the IRS over the channel that best meets their needs and have their inquiries fully addressed. The IRS has failed to follow the best practices used in other government agencies and the private sector to increase taxpayer loyalty and satisfaction. Because of the IRS’s archaic telephone technology and operations, taxpayers face long wait times with the worry that the IRS’s telephone assistors will not be able to answer their questions if they are able to get through. Failing to provide high quality service to taxpayers over the phone has the potential to reduce voluntary compliance, which can place an unnecessary burden on the compliance functions of the IRS in the future.

The National Taxpayer Advocate believes that the IRS should develop a multi-faceted omnichannel service strategy based on the needs and preferences of taxpayers. We fully support the IRS in its efforts to develop online accounts for individuals and their authorized representatives. However, with approximately 41 million U.S. taxpayers without broadband at home and almost 14 million with no internet access at all at home, the IRS must continue to fully staff other service channels and it needs to upgrade its telephone technology to 21st century. Taxpayers have a right to quality service and those taxpayers who want or need to interact with the IRS in a two-way conversation by telephone or face-to-face service should receive the same level of quality service as those who use the online self-help tools.

The IRS has the authority under IRC § 7602 to examine, in what can be termed a “real” or traditional audit, any books, papers, records, or other data that may be relevant to ascertain the correctness of any return. However, the IRS does not consider a significant number of compliance contacts with taxpayers to be “real” audits, including math error corrections, Automated Underreporter (AUR), identity and wage verification, and Automated Substitute for Return (ASFR). Yet these contacts, or “unreal” audits, require taxpayers to provide documentation or information to the IRS, comprise the majority of compliance contacts, and feel very much like a “real” examination to taxpayers. “Unreal” audits lack taxpayer protections typically found in “real” audits, such as the opportunity to generally seek an administrative review with the IRS Office of Appeals (“Appeals”) or the statutory prohibition against repeat examinations. As the IRS is planning for the increased use of “unreal” audits through automated means with its “Future State” Initiative, it is crucial that the IRS reevaluate and revise its current guidance through the lens of the Taxpayer Bill of Rights.

Taxpayer Advocate Service (TAS) studies carried out in 2015 and 2016 showed, respectively, that 37 percent and 26 percent of approved entities in one of 20 states that post articles of incorporation online did not meet the organizational test for qualification as an Internal Revenue Code (IRC) § 501(c)(3) organization. This year’s TAS study of a representative sample of approved Form 1023-EZ applicants from those same 20 states found an erroneous approval rate of 42 percent. Meanwhile, the more detailed Form 1023 processing time, 96 days in Fiscal Year (FY) 2016, rose to 113 days for FY 2017. Thus, Form 1023-EZ as implemented created a new risk – erroneous grants of tax exemption – yet may not have solved the initial problem of long processing times for Form 1023.

A 2015 law requires the Department of State to deny an individual’s passport application and allows it to revoke or limit an individual’s passport if the IRS has certified the individual as having a seriously delinquent tax debt (i.e. tax debt exceeding $50,000 (adjusted for inflation), including assessed interest and penalties). Although the IRS will not implement the program until early 2018, its proposed procedures and policies raise concerns. The failure to provide adequate notice and to exclude taxpayers exercising certain administrative rights will harm taxpayers. Although the Department of State will hold passport applications open for 90 days before rejecting them, this may not be enough time for taxpayers to resolve their debts and be decertified.