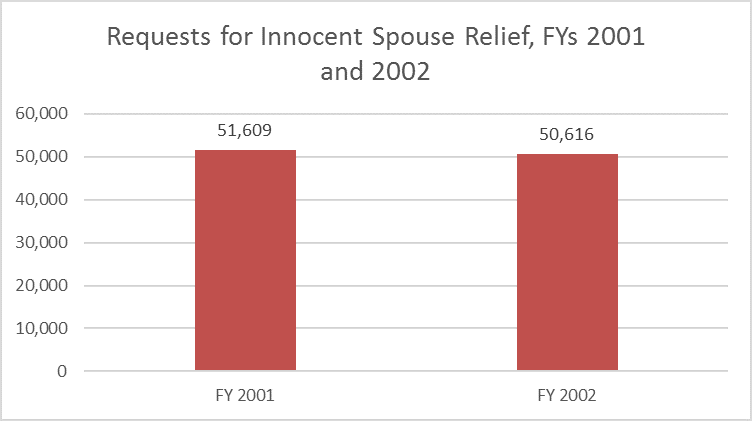 To obtain relief under IRC § 6015(b) or (c), the innocent spouse must request relief within two years after IRS collection activities began. The statute does not impose a period within which a taxpayer must request equitable innocent spouse relief. However, as many practitioners will recall, the IRS used to apply one of the regulations under IRC § 6015(f) which requires the taxpayer to request equitable relief within two years after the IRS initiates collection activity with respect to the taxpayer.

In 2009, in the Lantz case, the Tax Court held invalid the regulation imposing the two-year time limit for requesting relief under IRC § 6015(f). The decision was reversed by the Court of Appeals for the Seventh Circuit. The Tax Court adhered to its position, and by mid-June of 2011, two additional courts of appeals, in separate cases (Manella and Jones), had reversed the Tax Court’s holding that the regulation was invalid. Several other cases with the same issue were pending in other courts of appeal.

On July 25, 2011, the IRS announced that notwithstanding the appellate court decisions that upheld the validity of the regulation, the IRC § 6015 regulations should be revised to remove the two-year rule for requests for equitable relief. Under guidance that was issued pending modification of the regulations, taxpayers requesting equitable relief under IRC § 6015(f) after July 25, 2011 could do so without regard to when the first collection activity was taken. Requests for relief must be now filed within the period of limitation on collection in IRC § 6502 or, for any credit or refund of tax, within the period of limitation in IRC § 6511. The IRS filed motions for voluntary dismissal on July 25, 2011 in cases pending in the various appellate courts. 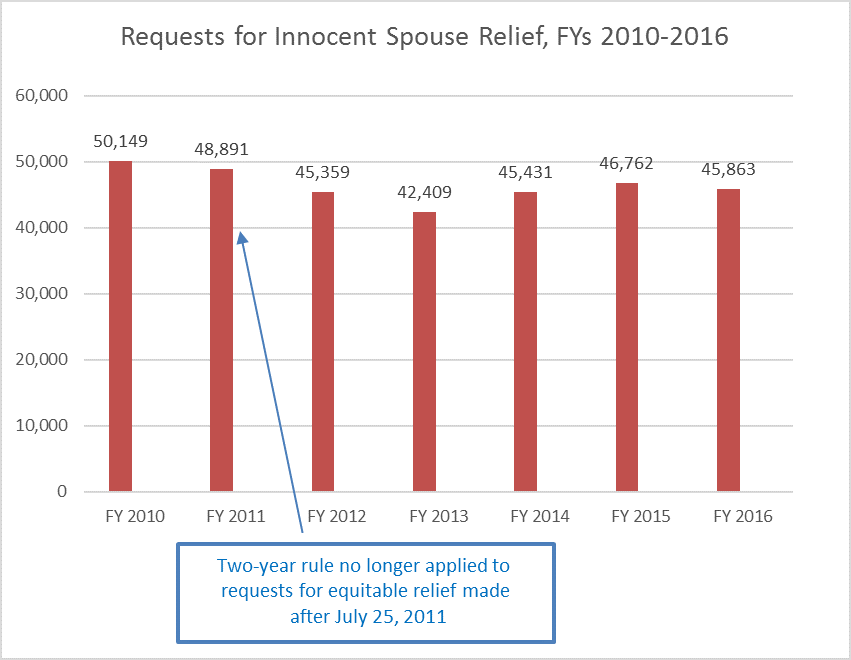 Interestingly, the Treasury regulation imposing the two-year rule is still on the books. Proposed Treasury regulations to remove the two-year deadline were published on August 13, 2013, and public comment on the proposed regulations was invited. None of the four persons who submitted comments opposed removing the two-year rule, yet to date the regulations have not been finalized. I included in my 2017 Purple Book the recommendation that Congress codify the rule that taxpayers can request equitable relief under IRC § 6015(f) any time before expiration of the period of limitations on collection. I am pleased that on April 18, 2018, the House of Representatives, in a bipartisan bill passed with a recorded vote of 414-0, adopted the recommendation in the Taxpayer First Act, H.R. 5444.

As noted, removing the two-year period for requesting equitable innocent spouse relief does not appear to have opened the floodgates to a deluge of innocent spouse claims. Not only that, the decrease in the number of claims occurred even as the IRS made other changes to the rules for innocent spouse relief that seem to have helped taxpayers. In January 2012, the IRS, in Notice 2012-8, issued a proposed revenue procedure to supersede Revenue Procedure 2003-61, the guidance previously used to analyze claims for equitable innocent spouse relief. The proposed revenue procedure expanded the equitable relief analysis by providing additional considerations for taxpayers seeking relief. The proposed guidance was used to evaluate claims pending its finalization, and was ultimately finalized as Revenue Procedure 2013-34.

According to the 2012 LITC presentation, in FYs 2010 and 2011, immediately before Notice 2012-8 was issued, the most frequent outcome in innocent spouse cases was a complete denial of relief. For FY 2010, 56 percent of the determinations were full denials (meaning not even partial relief was granted); for FY 2011, 60 percent were full denials. For FY 2012, after the new guidance was issued, the most frequent outcome was full allowance; only 26 percent were full denials. The chart below shows the outcomes in innocent spouse cases for FYs 2010-2012. 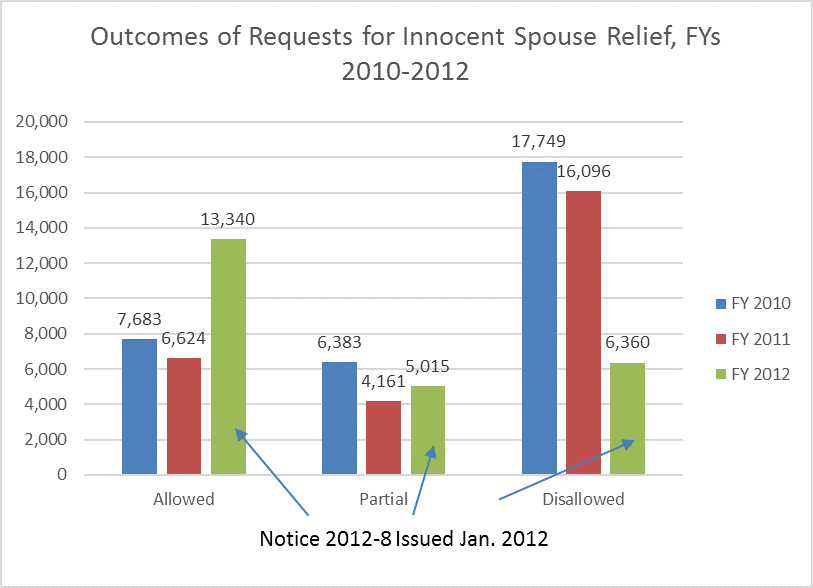 In FYs 2013-2016, the granting of full relief was also the most likely outcome, although the number of fully denied claims crept up over that period. Complete disallowances accounted for 29 percent, 33 percent, 36 percent, and 42 percent of the outcomes in FYs 2013, 2014, 2015, and 2016, respectively. In FY 2017, however, full relief was granted only 39 percent of the time; 48 percent of determinations were complete disallowances. The chart below shows the outcomes in innocent spouse cases for FYs 2013-2017. 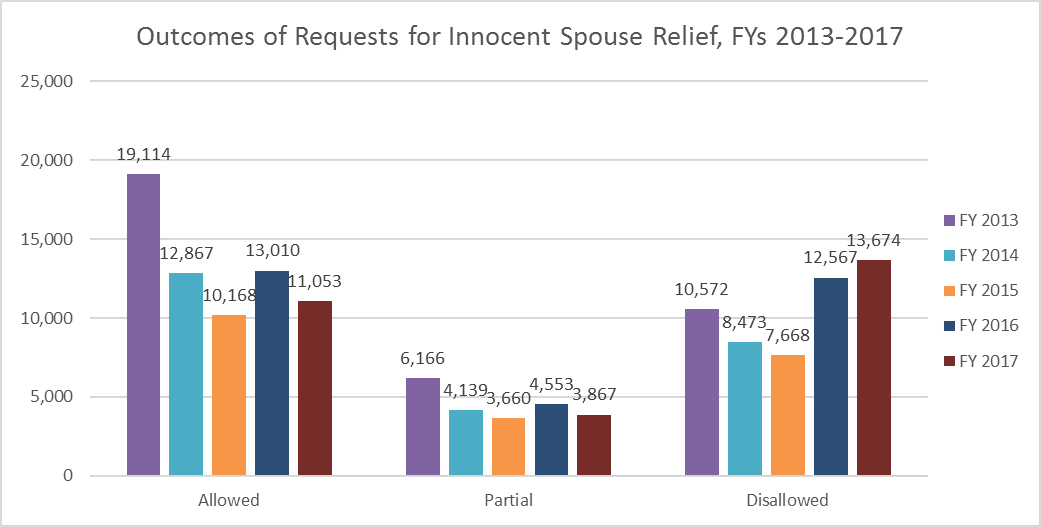 Thus, it does not appear that extending the time limit for requesting equitable innocent spouse relief made taxpayers more likely to file claims for relief.  Even granting relief more frequently does not seem to affect the number of claims. It would be interesting to know why taxpayers request relief less frequently now than they did in the past, but I am also concerned with understanding the increased frequency with which the IRS is denying the claims for relief taxpayers do submit. The Office of the Taxpayer Advocate will be exploring this issue in the year to come.