The other day, I came across an interesting item in the news, describing that for the first time in its history, Macy’s was only letting people with appointments visit its famous Santa. I was interested in this because, for all intents and purposes, the Internal Revenue Service (IRS) had been “appointment only” in its Taxpayer Assistance Centers (TACs) since November 2016. So on the face of it, the IRS was in the vanguard of customer service.

Of course, it is silly to equate the IRS with Macy’s department store. Tax compliance, which is the IRS’s business, is about as far from the retail business as one can get. Yet both are (or should be) concerned about customer service, and the IRS may be able to learn some lessons from Macy’s. Macy’s decision to go appointment-only for Santa is obviously driven by the desire to reduce the irritation of potential customers standing in line for hours and becoming irritable, which would negatively impact the amount of time for and enjoyment of spending money on store purchases. Macy’s lets people schedule online up to 30 minutes in advance. So Macy’s isn’t trying to keep people away from its Santa – it wants people to come see Santa and go into its store and shop.

But what could be the IRS’s rationale for moving to appointment-only in the TACs? Well, certainly there is concern that taxpayers might travel a great distance and show up at a TAC only to find a long line and be turned away. From this perspective, it would be a kindness to let the taxpayer call in advance and make an appointment. And the folks who answer the TAC appointment line calls can often resolve the taxpayer’s issue over the phone, saving the taxpayer a trip.

Giving taxpayers specific appointment times, resolving issues over the phone, and saving taxpayers unnecessary trips are all positive things. But none of those benefits explain why the IRS should mandate appointments in the TACs. Unlike Macy’s, taxpayers cannot call up the IRS and get an appointment within 30 minutes. (On some days, taxpayers are lucky to be put on hold with the IRS for only 30 minutes.) And unlike Macy’s, the IRS is actively trying to discourage taxpayers from coming into its TAC “store” by systematically reducing the “products” and services it offers there.

In fact, for many years I have detailed my concerns about IRS face-to-face service in general, and more specifically the services provided (or not provided) by the TACs. I have offered numerous recommendations to the IRS on how to improve person-to-person service, including innovative ways to reach taxpayers in need where they are, rather than making taxpayers come to the IRS. Nonetheless, the IRS has continued to make cuts to services provided at TACs, culminating with switching to an appointment-only system for visiting what used to be colloquially known as “walk-in” sites.

I have heard concerns from practitioners, taxpayers, and the network of TAS Local Taxpayer Advocates (LTAs), several of which I will share in today’s blog. At the Southeastern Regional Bar Liaison’s meeting, I heard from several practitioners regarding the service shortcomings at TACs. While the IRS has told TAS that appointments are not necessary for routine tasks like filing a return, making a payment, or picking up forms, based on the stories I have heard, this message from headquarters may not be reaching the field.

One attorney at the meeting relayed to me that he had visited a TAC to make a multi-million-dollar payment to the IRS on behalf of his client. The TAC refused to accept the check, which his client wanted hand-delivered for security reasons. The client and the practitioner were baffled that the IRS would turn away money. Of the attorneys at the meeting, one-quarter indicated that they had been turned away from TACs since January 2017, when trying to make a payment. The IRS is the tax collector!  How can it ever justify not accepting a check?

More recently, the IRS issued an alert to employees further clarifying what taxpayers can do at TACs without an appointment and modifying the appointment system.  Customer Service Representatives will no longer schedule same day appointments for TAC service (much less 30 minutes in advance, like Macy’s). Previously, if a taxpayer arrived at a TAC without an appointment, found the TAC was empty of customers, and the manager would not use discretion to help the taxpayer, the taxpayer could step outside, call for an appointment and possibly receive assistance shortly thereafter if an appointment showed as available. Now, that same taxpayer must make the phone call and come back another day. The failure to use existing resources efficiently is concerning, both from compliance and taxpayer rights standpoints. Turning a taxpayer away for not having an appointment when TAC employees have no other appointments scheduled makes no sense and confuses, frustrates, and upsets taxpayers. And since we aren’t talking about department stores here, but rather tax compliance, taxpayer confusion, frustration, and unhappiness translates very easily into tax noncompliance.  This is not a good business model.

Wherever a TAS office is co-located with a TAC, TAS employees assist taxpayers turned away from the TACs but only if a TAC employee or a building security guard kindly points the taxpayer to TAS. One LTA has been keeping a detailed log of the times the TAS office assists taxpayers who could not get help at the TAC. In one egregious example, a taxpayer drove nearly 100 miles to get assistance at the TAC and was turned away; the TAC manager would not make an exception to assist the taxpayer despite the hardship that repeating the drive would create for the taxpayer. TAS stepped in to assist the taxpayer and resolve his issue. In another example, a taxpayer who was a victim of identity theft attempted to make a payment at the TAC, only to find the TAC closed. The IRS website had not been updated timely to reflect the closure. Because the taxpayer only had Internet access via his phone, making a payment online was not practical and the taxpayer had grave concerns about security due to being a victim of identity theft. TAS assisted the taxpayer in making the payment.

Now, I recognize the concerns the IRS has with budget constraints, and I also acknowledge that brick and mortar locations are expensive. I’m sensitive to the IRS’s understandable desire to nudge taxpayers toward less expensive service channels. But many taxpayers continue to want to have their tax issues resolved face-to-face, and situations will continue to exist where this type of customer service is the most appropriate way to resolve an issue for that taxpayer. But, when the IRS hangs the sign depicted below up at all TACs, what message is it sending to taxpayers? 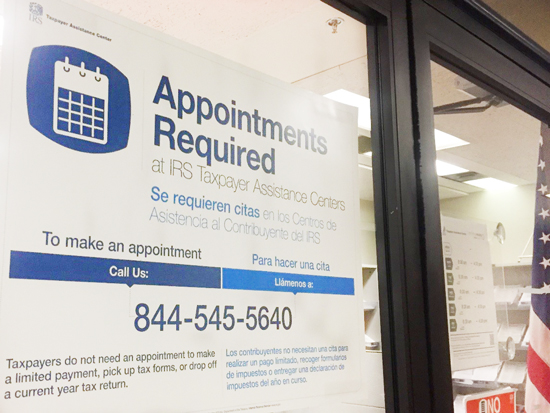 This sign certainly doesn’t look like a nudge to me – it looks more like a door shut in your face. How much more reassuring would it be to post a sign that reads, “Appointments Recommended, But Walk-ins Welcome”? If people walk in, you can still serve them while educating them on the benefits of making an appointment in advance. And we should never lose sight of the fact that the IRS’s job is to help taxpayers comply with their tax obligations. People don’t come to TACs to see Santa; they come to get help with meeting their responsibilities as taxpayers. Why ever would we turn them away?

You can read more about my concerns about TAC service and the closures of TACs in the upcoming National Taxpayer Advocate 2017 Annual Report to Congress, which will be released in early January.