In my most recent Annual Report to Congress, I published a study in support of the Service Priorities Project (SPP), a joint effort between Taxpayer Advocate Service (TAS) and IRS Wage & Investment (W&I). The goal of the SPP is to produce a matrix to help the IRS identify where to allocate its taxpayer service resources. To assist the IRS in determining service priorities, the matrix presents data on taxpayer needs and preferences as well as more traditional IRS “efficiency” concerns. While W&I initially worked with TAS in the development of the SPP, ultimately I felt that the additions to the Taxpayer Experience Survey did not address the missing data needed to complete the SPP matrix. I directed TAS Research to develop a study and fill in the gaps of the SPP. The result, A Further Exploration of Taxpayers’ Varying Abilities and Attitudes Toward IRS Options for Fulfilling Common Taxpayer Needs, revealed several areas that I’d like to highlight today.

The IRS has long pursued a strategy of moving taxpayers to online service. In a way, this makes sense – having taxpayers use the internet may reduce cost to the IRS, allowing the agency to allocate funds to other functions. However, I have continuously pointed out that not all taxpayers are able or willing to use the internet to complete tax-related activities and the IRS must address the service needs of all taxpayers, not just those whose needs are least expensive. Moreover, with respect to certain taxpayer service needs, online assistance is only superficially cost-effective and can be counterproductive. The findings of our survey confirm the need to maintain an omnichannel service strategy.

For example, the survey found that approximately 41 million U.S. taxpayers have no broadband access at all in their homes. Even though many of these taxpayers have dial-up internet or a mobile data plan, I don’t consider that adequate for being able to complete the types of activities needed to comply with the Internal Revenue Code. Think about downloading the instructions for filing your Form 1040 (tax return). The instruction file for filing your 2017 taxes is 2.99 mega-bytes and 107 pages long. Imagine trying to download that via a dial-up connection. I suspect you could leave it running over-night and it still wouldn’t be ready for you in the morning from a dial-up connection. Constructively, these taxpayers may as well not even have internet access for the purposes of interacting with the IRS. 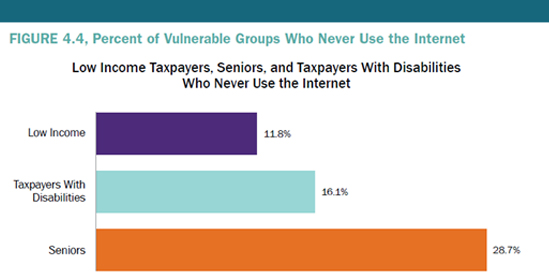 Moreover, the study showed that taxpayers prefer different channels for various activities, and, interestingly, that taxpayers generally prefer to continue using the same channel they initially preferred for future interactions. Users of the IRS telephone system are generally more willing to consider a different delivery channel in the future. However, telephone users would still prefer to receive assistance with tax law questions over the phone. Taxpayers were more likely to report a negative impact if they could not obtain services related to payments, refunds, or obtaining an Individual Taxpayer Identification Number. Similarly, Taxpayer Assistance Center (TAC) users reported a significant negative impact if they could not obtain answers to tax law questions in person at a TAC.

It is not just taxpayers with limited or no internet access who have concerns about using digital platforms for their taxes. Our survey found that over half of the taxpayer respondents were not comfortable sharing their personal information with the government. These concerns cut across all income and even some age levels; they appear to have more to do with concerns about fear and privacy. I think if we conducted this survey today, those fears would be heightened, given recent breaches involving hundreds of millions of individuals’ personal data. 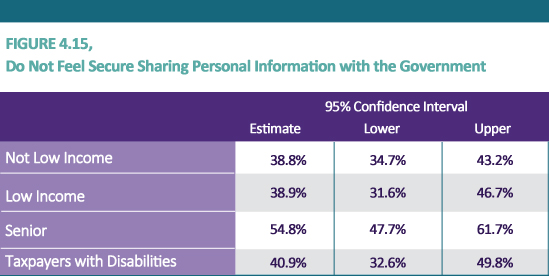 For both the IRS and the taxpayer, the desired outcome is first contact resolution (FCR). As I discussed in a previous blog, FCR reduces frustration for taxpayers, conserves IRS resources, and prevents future rework when the taxpayer must interact with an additional employee and re-explain the issue at hand. To achieve the goal of FCR, the IRS must offer robust multi-channel service delivery for taxpayers. Our study reinforces the fact that not all taxpayers can use the internet to interact with the IRS, and, even if it were a possibility, not all taxpayers want to use the internet due to security or other concerns.

For a complete discussion of the findings from the SPP study, visit the website for my 2017 Annual Report to Congress.