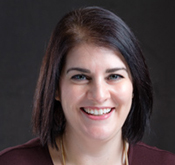 Bridget attended Villanova University School of Law, and received her Juris Doctorate (J.D.) degree in 2003. During her time at Villanova, Bridget represented taxpayers before the IRS as a student participant in the Low-Income Taxpayer Clinic (LITC). This invaluable experience led to her selection as TAS’s first attorney advisor for the LITC program. During her time with LITC, Bridget focused primarily on oversight of the LITC program (conducting site visits, reviewing grant applications, and making grant recommendations). When she joined TAS’s Attorney Advisor Group in 2004, she continued to work with the LITC program, and took on additional areas such as taxpayer service, financial literacy, and the Earned Income Tax Credit (EITC). During this time, she also earned her LLM (Masters in Law) in Taxation from Georgetown University Law Center.

In 2008, Bridget started a two-year special appointment to the Senate Finance Committee, where she worked issues such as employee benefits, executive compensation, and IRS oversight. She also helped lead the committee on developing the tax provisions of the Affordable Care Act (ACA), which included developing the Small Business Health Care Tax Credit, hosting a working group of Senate staffers to develop policy proposals, and drafting legislative language.

Following her time on Capitol Hill, Bridget returned to TAS as an Attorney Advisor and TAS’s subject matter expert on the ACA and its implementation. She led the design and roll-out of many training courses, including a week-long course for all TAS employees, which allowed her to meet many of TAS’s employees in person. She also created the ACA Rapid Response Team to handle day-to-day ACA implementation issues during this time.

As DNTA, Bridget works actively with IRS executives from across the organization on many different IRS initiatives that impact TAS and our taxpayers. She also manages the Executive Director of Case Advocacy (EDCA), the Executive Director of Case Advocacy Intake and Technical Support (EDCA-ITS), TAS Business Modernization, Strategy Assessment and Employee Development, TAS Financial Operations, TAS embedded Labor Relations, and other Headquarter-Level Directors in TAS.

“On March 12, 2020, TAS celebrated its 20th anniversary. Although the IRS previously had procedures in place to assist taxpayers with unresolved tax problems, the creation of TAS provided a direct line of communication between taxpayers and the National Taxpayer Advocate, who reports directly to the IRS commissioner and to Congress.”