Subscribe to the NTA’s Blog and receive updates on the latest blog posts from National Taxpayer Advocate Erin M. Collins.

The Taxpayer Bill of Rights (TBOR) grants taxpayers the rights to privacy and to a fair and just tax system. The Internal Revenue Service’s official explanation of these rights, in Publication 1, states in part: “Taxpayers have the right to expect that any IRS …enforcement action will comply with the law and be no more intrusive than necessary,” and “to expect the tax system to consider facts and circumstances that might affect their underlying liabilities, ability to pay, or ability to provide information timely.”

At the time the TBOR was codified in IRC § 7803(a), Congress had already created statutory remedies for violations of these rights, including protections to prevent individual taxpayers from experiencing economic hardship while owing a tax liability. For instance, under IRC § 6343(a)(1)(D), the IRS must release a levy if it determines that the levy is creating an economic hardship for the taxpayer. Treasury regulation § 301.6343-1(b)(4) explains that an economic hardship occurs when collection action will “cause an individual taxpayer to be unable to pay his or her reasonable basic living expenses.” And to ensure taxpayers entering into an offer in compromise (OIC) have “adequate means to provide for basic living expenses,” IRC § 7122 (d)(2)(A) required the IRS to develop and publish schedules of national and local allowances. The resulting Allowable Living Expense (ALE) standards represent what amount of money the IRS determined is necessary for a taxpayer and his or her family to meet all necessary living expenses. Anything above this amount will be considered in calculating the taxpayer’s ability to pay the tax liability. ALEs now play a large role in many types of collection cases.

As I explained in the 2018 Annual Report to Congress, and in recent testimony, the IRS does not proactively use its internal data to identify taxpayers at risk of economic hardship throughout the collection process. For example, the IRS does not compare its internal data about a taxpayer’s income to the taxpayer’s ALEs before undertaking collection actions or agreeing to certain installment agreements (IAs) with taxpayers. It also does not have a method to alert collection employees that a taxpayer may be at risk of economic hardship and, when responding to taxpayer inquiries, to ask questions about the taxpayer’s finances to determine an appropriate collection action or alternative.

Many anxious or intimidated taxpayers seeking to resolve their liabilities as quickly as possible may be unaware the IRS is required to halt collection action if they are in economic hardship and thus agree to make tax payments they cannot afford. Theoretically, if and when a taxpayer calls the IRS stating that he or she cannot pay the tax due, the IRS collection employee should be able to verify some, or all of the financial information provided by the taxpayer. But IRS guidance in IRM 5.14.1.2 instructs its Collection employees to first obtain full payment and if that is not possible offer a streamlined IA under IRM 5.14.5.2.

If a taxpayer qualifies for a streamlined IA (depending on the type of taxpayer and the amount of unpaid balance), this can be an excellent tool because it allows the taxpayer to bypass the need for an IRS employee to analyze his or her financial circumstances and obtain managerial approval prior to entering into an IA. However, it is just this financial analysis that protects low income taxpayers from entering into IAs they cannot afford. 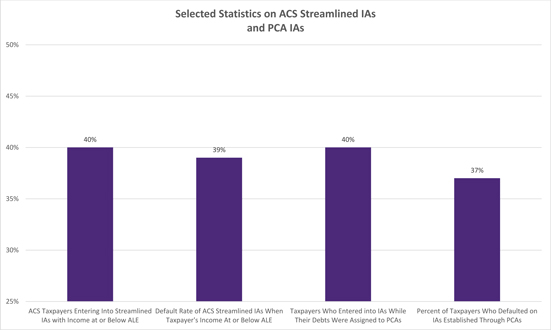 Taxpayers who cannot afford to pay their tax liability because of economic hardship are not without options. Alternatives for taxpayers who cannot afford to enter into IAs include having the IRS consider their liabilities to be currently not collectible (CNC-hardship) under IRM 5.16.1.2.9 or accepting an OIC that reflects the true reasonable collection potential under IRC § 7122.

Since the IRS has internal data about a taxpayer’s income and assets from prior years’ tax returns and third-party information documents, the IRS could use this data in an algorithm applied through automation to the accounts of all taxpayers who owe back taxes. The system could flag the accounts of all taxpayers whom the screen identifies as having incomes below their ALEs and no detectable assets. This indicator could be used as a warning to taxpayers who are attempting to enter into streamlined IAs online, with perhaps a pop-up message suggesting they seek alternative collection options like CNC-hardship or an OIC. Moreover, the indicator would alert IRS assistors speaking with taxpayers over the phone of the need to verify their ability to pay before placing them in streamlined IAs that are likely to default. In fact, the IRS could program their systems so when an assistor keys in the Social Security number of a taxpayer with an economic hardship risk indicator, a screen is generated with the income information, projected family size, and appropriate ALEs. This way, the assistor can simply run through some high-level information to verify its accuracy. This approach uses data to proactively protect the taxpayers’ rights to privacy and a fair and just tax system.

The IRS could use this algorithm at several other stages of the collection process, including to screen out taxpayers at risk of economic hardship from automated collection treatments such as being selected for referral to private collection agencies, or passport certification unless and until the IRS has made a direct, personal contact with the taxpayer to secure more financial information.

In the past, in response to my recommendations that the IRS proactively use data to exclude taxpayers experiencing economic hardship, it has said that it is too difficult to create the algorithm because the data is stored in different systems. (The IRS’s information technology challenges is a subject on which I have written a great deal, most recently by submitting a legislative recommendation to Congress for multiyear funding for a replacement of its ancient Master File databases.) In order to address the IRS’s objections, I asked my research staff to look at the financial circumstances of taxpayers assigned to the Automated Collection System (ACS) over the last five years. We then applied three multiples of federal poverty levels to that same population base to determine if a percentage of federal poverty level (computed on adjusted gross income (AGI)) would be a reasonable proxy for ALE. Approximately 10 percent of this population could not be analyzed because these taxpayers did not file recent tax returns and therefore we could not determine their AGI.

The take-away from all this is that the IRS has sufficient data in-house to identify in advance of collection action those taxpayers who are likely to be at risk of economic hardship. If the IRS wants to adhere to the Taxpayer Bill of Rights, it should be using this data proactively to exclude these taxpayers from automated enforcement actions until it has actually personally communicated with the taxpayer. It should also use this data to alert IRS assistors of the taxpayer’s risk of economic hardship and require assistors in these instances to verify the taxpayer’s income when the taxpayer calls.

This approach not only comports with the TBOR and the law, but it also brings the IRS into 21st century tax administration. It is very frustrating to hear the IRS say it needs more enforcement resources when its very procedures force taxpayers with economic hardship into streamlined IAs that later default. The IRS’s current approach not only burdens taxpayers but wastes IRS resources and creates rework for IRS and Taxpayer Advocate Service employees. It is way past time for the IRS to be proactive in this arena and use its data to help taxpayers, rather than just harming them.