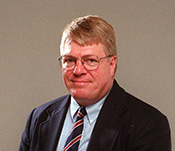 After launching a political career in 1980, W. Val Oveson was appointed Chairman of the Utah State Tax Commission in 1993 by Governor Mike Leavitt. In this capacity he redesigned the computer systems and processes for the commission and created the Utah Tax Law Library on CD-ROM. He served in this position until 1998, when he was appointed the first head of the Office of the Taxpayer Advocate; this position had been created by legislation passed by Congress in 1996. In this role, Oveson led 2,300 employees in 74 locations across the U.S., reported independently to Congress on problems facing America’s taxpayers, and recommended administrative and legislative solutions to stop the problems from recurring.

In 2000, Oveson joined PricewaterhouseCoopers, where he was a managing director and lead of the knowledge management function for the state and local tax group. In 2003, Governor Leavitt selected Oveson as Utah’s Chief Information Officer. Oveson was confirmed by the Utah Senate and served until the end of Leavitt’s term.

Read the NTA's prior Reports