The IRS created the Office of the Taxpayer Ombudsman to serve as the primary advocate within the IRS for taxpayers.

Taxpayer Bill of Rights (TBOR 1), part of the Technical and Miscellaneous Revenue Act of 1988, codified the Office of the Taxpayer Ombudsman.

The law added Internal Revenue Code (IRC) section 7811, which granted the Ombudsman the statutory authority to issue Taxpayer Assistance Orders (TAOs) when taxpayers were suffering or about to suffer significant hardships because of the way the Internal Revenue laws administers laws. The law also directed the Ombudsman and the IRS Assistant Commissioner (Taxpayer Services) to provide an annual report to Congress about the quality of the IRS’s taxpayer services.

Taxpayer Bill of Rights 2 (TBOR 2) brought about the Office of the Taxpayer Advocate.

TBOR 2 described the functions of the Office of the Taxpayer Advocate:

The first report, due by June 30, contains the objectives of the Taxpayer Advocate for the coming fiscal year (starting October 1). The second one, due by December 31, reports on activities of the Taxpayer Advocate during the fiscal year, including his or her initiatives to improve taxpayer services and IRS responsiveness, and a summary of at least 20 of the Most Serious Problems facing taxpayers.

TBOR 2 also amended IRC section 7811 to extend the scope of a Taxpayer Assistance Order by providing the Taxpayer Advocate with broader authority to take action and by setting a deadline for the IRS to act on the order.

Commission identified the Taxpayer Advocate as the “voice of the taxpayer.”

The IRS Restructuring and Reform Act of 1998 (RRA 98) mandated Local Taxpayer Advocates in every state and expanded the definition of “significant hardship.”

The law expanded “significant hardship,” the situations when the Local Taxpayer Advocate can issue a Taxpayer Assistance Order, to include four specific circumstances, though it also stated this is a non-exclusive list:

Congress also granted the LTAs discretion to not disclose to the IRS the fact that the taxpayer contacted the Office of the Taxpayer Advocate or any information provided by the taxpayer to that office.

The IRS published final regulations under Internal Revenue Code § 7811 so that the regulations contained a definition of “significant hardship” consistent with existing law and practice.

Since assuming her position in 2001, National Taxpayer Advocate Nina E. Olson has emphasized the protection of taxpayer rights in tax administration. In her 2007 Annual Report to Congress, and in later reports, she proposed a new Taxpayer Bill of Rights. On June 10, 2014, the IRS formally adopted the National Taxpayer Advocate’s proposal, to renew the focus on protecting the rights of taxpayers in all of their dealings with the IRS.

This document groups the dozens of existing rights in the Internal Revenue Code into ten fundamental rights, and makes these rights clear, understandable, and accessible for taxpayers and IRS employees alike.

The map illustrates, at a very high level, the stages of a taxpayer’s journey, from getting answers to tax law questions, all the way through audits, appeals, collection, and litigation. It shows the complexity of tax administration, with its connections and overlaps and repetitions between stages. As you can see from its numerous twists and turns, the road to compliance isn’t always easy to navigate. But we hope this map helps taxpayers find their way. 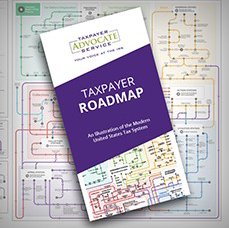 Read about your rights

Look up your Notice or Letter 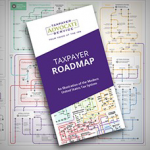 Read about the Roadmap