A big part of the OCC’s most recent transparency problem is that it allows its attorneys to avoid disclosure of advice to IRS program managers (called Program Manager Technical Advice or PMTA), by issuing the advice as an email, rather than a memo. Although I do not know when the OCC created this loophole, the number of PMTA disclosures has been falling in recent years (as shown below). Compounding the problem is that the OCC has not issued any written guidance describing what must be disclosed as PMTA and most of OCC’s attorneys have not received training on that topic in the last few years. In addition, the OCC has no systems to monitor whether all PMTAs are timely identified, processed as PMTAs, and disclosed.

I discussed these problems in the Annual Report because the OCC’s transparency is important to taxpayers. Through various laws, such as Freedom of Information Act (FOIA) (5 U.S.C. § 552), IRC § 6110, and the Taxpayer Bill of Rights (TBOR), Congress has granted taxpayers the right to be informed. It is the first right listed in the TBOR for good reason. If taxpayers do not know the rules and why the IRS has adopted them, they cannot determine if they should exercise their other rights (e.g., the right to challenge the IRS’s position and be heard or the right to appeal an IRS decision in an independent forum). Information about how the OCC interprets the law also helps taxpayers avoid taking positions that would incur penalties or ensnare them in audits or litigation.

Nonetheless, rather than voluntarily disclosing its PMTAs under the FOIA, the OCC has argued in court that they are privileged, even though, as many have observed (e.g., here, here, here, and here), the policy justification for privileges do not apply with the same strength to communications with government attorneys as they do to communications with those in the private sector. Pursuant to a settlement reached with Tax Analysts in July 2007, however, the IRS agreed to disclose PMTAs dated or prepared from 1995 forward “on the basis of the standards announced by” the U.S. Court of Appeals for the District of Columbia Circuit in its June 14, 2002, opinion in Tax Analysts v. IRS, “as applied by the district court” in its February 7, 2007, opinion in Tax Analysts v. IRS.

I first became concerned about the OCC’s implementation of the settlement when it did not timely disclose important advice that it issued in 2018. For example, the OCC was providing legal “calls” to the IRS concerning the Tax Cuts and Jobs Act (TCJA), which was enacted on December 22, 2017. The IRS was using the OCC’s calls to draft forms, FAQs and other guidance, but the advice was not being disclosed to the public, even though the public would have been interested in the legal reasoning behind those calls.  The calls still have not been disclosed.

As another example, the OCC advised the Wage & Investment Division (W&I) that it could use math error authority (MEA) to disallow tax credits long after the IRS had processed the returns (i.e., post-processing) and issued refunds, as discussed in another blog and the 2018 ARC. Although the OCC had issued PMTA 2018-17 on April 10, 2018, it did not post the advice until September 7—about five months later and only after inquiries by my staff—long after W&I had begun using its new post-processing MEA to adjust returns.

As another example, sometime before mid-April 2018, the OCC had given the Large Business and International Division (LB&I) advice about the newly-enacted “transition tax” under IRC § 965. LB&I relied on the advice to issue FAQs and to deny refund requests, as discussed in another blog. Although IRC 965(h) says that taxpayers can pay the tax over an eight-year period without interest, the OCC advised that LB&I had no legal authority to return excess payments to taxpayers (i.e., payments of more than the amount required for the first installment but less than the entire transition, even though the entire tax did not have to be paid for eight years). Although LB&I was relying on the OCC’s advice to retain excess payments, the advice had not been disclosed. After inquiries from TAS, the advice was belatedly rewritten and disclosed as PMTA 2018-16 (Aug. 2, 2018).

The OCC told us that PMTA 2018-16 and -17 were only released because there was an “agreement” with W&I and a “request” by LB&I, respectively, to disclose them. It is unclear why the OCC thought it needed IRS permission to release them as opposed to being required to disclose them under the settlement and the FOIA.

Moreover, the OCC’s delay in disclosing its advice probably harmed taxpayers. Had OCC’s legal analysis been released to the public sooner, stakeholders would have understood the OCC’s interpretation of the law and started efforts to protect taxpayers sooner. Some taxpayers could have avoided making payments they could not recover if the PMTA had been disclosed when it was first issued to LB&I (i.e., before LB&I’s FAQs). These examples prompted TAS to look further into how the IRS was implementing the settlement with Tax Analysts.

The OCC Has Been Disclosing Fewer PMTAs

Following the Tax Analysts litigation, the OCC posted a significant number of PMTAs on IRS.gov; however, it has generally been posting fewer in recent years, as shown below. 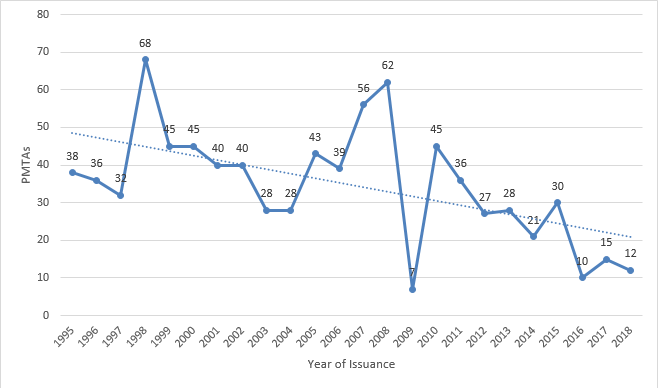 [Source: TAS analysis of PMTAs posted on IRS.gov as of February 19, 2019.  Where a PMTA did not have an issue date, TAS estimated the year based on when the case was closed and the date of memos posted before and after.]

As of February 19, 2019, the OCC had released only 12 PMTAs that were issued in 2018.  While some of the decline in PMTAs could be due to the decline in the IRS’s budget, one would expect the OCC to provide significantly more advice to program managers as a result of the TCJA. It issued 68 PMTAs following tax legislation enacted in 1998—more than double the number it issued in 1997, whereas the number actually declined following the TCJA. Moreover, only one of the 12 PMTAs issued in 2018 concerns the TCJA (i.e., PMTA 2018-16, as discussed above).

In the OCC’s formal response to a TAS inquiry, it said that “[t]he function of the legal advice provided by the Office of Chief Counsel is not to inform taxpayers or practitioners about how it interprets the law… [and] The issue of whether the Office of Chief Counsel is releasing advice in compliance with court decisions interpreting the FOIA and the process for performing that function is not a problem that taxpayers have with the Internal Revenue Service…” Given this view, it is perhaps unsurprising that it we found problems with the OCC’s disclosure procedures.  The rest of this blog summarizes those problems.

The OCC has provided oral training to about 207 attorneys since 2015—less than 40 percent of those employed in Washington, D.C.—about what must be disclosed as PMTA. Thus, most attorneys have not received training recently and some may not have received training at all. Moreover, because the attorneys were not given written training materials and the Chief Counsel Directives Manual (CCDM) contains no specific guidance about what advice must be disclosed as PMTA, there is no way to verify whether the training was accurate or consistent.  In theory, the decline in PMTAs could be due to inaccurate or inconsistent training and a lack of written guidance. However, the procedures themselves (discussed below), are more likely to be the problem.

The OCC Does Not Disclose Email as PMTAs

In its formal response to TAS, the OCC described what must be disclosed as “advice [that] is in memorandum form and otherwise meets the standards announced by the circuit court in Tax Analysts v. IRS, 294 F.3d 71 (D.C. Cir. 2002), and as applied by the district court in Tax Analysts v. IRS, 483 F.Supp.2d 8 (D.D.C. 2007).” [Emphasis added.] The OCC was quick to point out that it “does not encourage its attorneys to provide legal advice in a manner that circumvents” the rules.  If the OCC’s written response is consistent with its formal response to TAS, however, then it is leaving its attorneys in the dark about what must be disclosed while highlighting that they can avoid disclosure by issuing advice as an email, rather than in “memorandum form.” Such a practice would implicitly encourage the OCC attorneys to circumvent the rules.

The OCC Has No Systems to Ensure All PMTA Are Timely Identified, Processed as PMTA, and Disclosed

The OCC’s response also acknowledged that it has no system to determine whether the attorneys who issue PMTAs have provided them to the function responsible for making disclosure determinations (e.g., OCC attorneys assigned to Procedure & Administration (P&A)) and no guidelines for how quickly PMTAs must be sent to this function and posted. It noted that PMTAs are generally processed quarterly. As a result, PMTAs may be posted long after the IRS has implemented the advice—and long after it could benefit taxpayers and their representatives (e.g., by avoiding positions that would incur penalties or ensnare them in audits or litigation). Moreover, the lack of any timeliness goals makes it difficult to determine (assuming OCC’s management exercises any oversight) whether a particular PMTA was withheld or whether its disclosure was merely delayed.

The problems with the transparency of the OCC may be due to the fact that some of its leaders believed in 2018 that “[T]he issue of whether the Office of Chief Counsel is releasing advice in compliance with court decisions interpreting the FOIA and the process for performing that function is not a problem….” I look forward to working with the OCC’s new leadership to develop clear written guidance that defines when advice constitutes PMTA that must be disclosed, close the loophole for emailed advice, train all of the OCC’s attorneys on the new procedures, and establish a process to ensure advice that should be disclosed as PMTA is being identified and disclosed in a timely manner, without regard to whether the IRS would like the advice to be disclosed. OCC could easily use the same internal systems that are in place to disclose Chief Counsel Advice to field employees.  Anything short of these steps will violate taxpayers’ right to be informed. Contrary to OCC’s formal response, this situation is, indeed, a most serious problem for taxpayers.