In some of my recent blog postings, I’ve raised concerns about the impact of IRS correspondence examinations on taxpayers’ rights, including the failure to provide taxpayers with the specific name and contact information of the auditors examining their returns. The IRS uses correspondence examinations – “corr exams” – because it believes they are a cost-effective way to conduct audits of less complex issues for a large number of taxpayers while minimizing burden on those taxpayers.

Leaving aside whether there is such a thing as a “less complex” tax issue, let’s examine whether corr exams are as cost effective as the IRS thinks. The traditional method of conducting an audit is through a face-to-face meeting with an IRS auditor, either in an IRS office (office audit) or at the taxpayer’s home or business (field audit). The IRS sends out an initial letter informing the taxpayer which year(s) it is examining and what items it is interested in, and asks the taxpayer to call to arrange a meeting. At the meeting, the
IRS Revenue Agent assigned to the case reviews IRS Publication 1, Your Rights as a Taxpayer, with the taxpayer and explains the appeals process.

With corr exams, there is no one Tax Examiner assigned to the case. Instead, a computer issues a letter that tells the taxpayer to send in documentation to support his or her claim of an item on the tax return. The contact name listed on that letter is “Tax Examiner” and the phone number is that of the IRS Service Center unit that issued the letter. Each time the taxpayer calls to discuss the corr exam, he or she will reach a different Tax Examiner. (See “Are IRS Correspondence Audits Really Less Burdensome for Taxpayers?” February 6, 2012.) 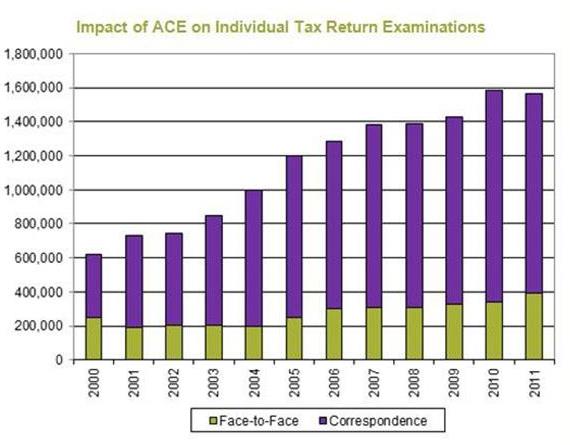 Today, the IRS generally reserves face-to-face individual audits for the most affluent taxpayers. Because corr exams focus on a single year and only one or two issues, they impact low and middle income taxpayers. These taxpayers are the least likely to be knowledgeable about IRS processes and taxpayer rights or to be able to afford representation. For example, 44.6 percent of all FY 2010 individual corr exams relate to the Earned Income Tax Credit (EITC), a refundable credit for low income workers and their families.

The effectiveness of corr exams is questionable when one views them in relation to face-to-face audits. According to the IRS, when it conducts EITC examinations face-to-face, as it does in the National Research Program (discussed later), it achieves an 85% response rate (for FY 2007). But the response rate falls to 30 percent (for FY 2010) for regular EITC examinations conducted by correspondence! In other words, EITC taxpayers were almost three times more likely to respond to and participate in a face-to-face EITC audit than one conducted by correspondence. If a taxpayer doesn’t respond and provide documentation of EITC eligibility, his or her EITC claim will be disallowed. Thus, the method of conducting an audit can have a significant impact on its outcome for the taxpayer.

As the following chart shows, corr exams have the highest no-response rate and the lowest agreement rate. Corr exams also have extraordinarily low rates of administrative appeals and United States Tax Court petitions. These low rates may be the consequence of unrepresented and inexperienced taxpayers’ ignorance of the audit process and their right to appeal an unfavorable decision. 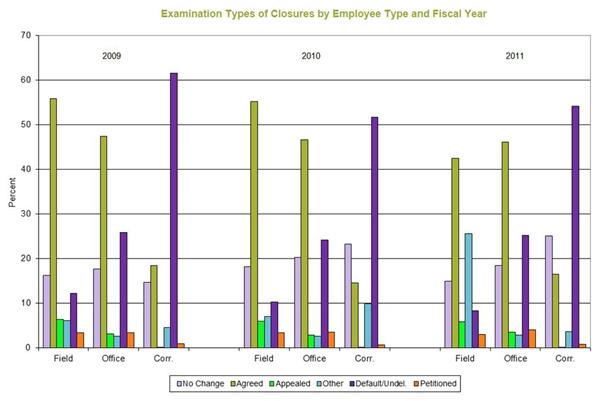 Taxpayers themselves have told the IRS about their dissatisfaction with corr exams. A recent independent customer satisfaction survey of a statistically representative sample of individual taxpayers whose 2009 returns were audited as part of the IRS National Research Program found that:

These survey results may help explain the high default rate for corr exam. Only 46% of corr exam taxpayers were satisfied with the clarity of the initial notification letter, and more than a quarter (28%) were dissatisfied. These data are corroborated by a survey that the Taxpayer Advocate Service conducted of a representative sample of taxpayers whose 2004 EITC claims were audited. In that survey, over a quarter (26.5%) said that they did not understand that the original audit notification letter was telling them they were being audited, and only about half felt they knew what they needed to do in response to the audit letter.

Low response rates for corr exam may also be explained by the difference in procedures for dealing with undelivered mail. Overall, about 10% of IRS correspondence is returned as undeliverable. Revenue agents conducting face-to-face audits are required to use all internal resources including the IRS asset locator tool (Accurint). These employees also use external sources like Postal Tracers, Telephone Book, and the Internet to find more current addresses. No such research occurs in corr exam. If the audit notice is returned as undeliverable and the period of time programmed into the computers for taxpayer response has passed, the machines issue a Statutory Notice of Deficiency (SNOD) to the same (undeliverable) address. If the taxpayer does not file a petition in the Tax Court within 90 days after the SNOD is issued (150 days if the taxpayer lives overseas), the IRS assesses the tax and begins collection.

Notwithstanding the concerns I’ve outlined above, it is a foregone conclusion that the IRS will continue to conduct corr exams for the vast majority of individual audits (75% in FY 2011). Today’s budget environment makes it all but impossible for the IRS to back away from its nominally less-expensive correspondence examination approach. So, what can we do to bring in some of the proven taxpayer-helpful aspects of face- to-face audits without sacrificing the cost savings of corr exams?

As the National Taxpayer Advocate, I’m interested in hearing from taxpayers and their representatives about what your experiences have been with correspondence exams and how you think the IRS can improve them. For example, would you want to have one employee handle the case once you’ve submitted documentation to the IRS, so you have a person to contact? Would you be willing to tolerate not being able to reach that person immediately (e.g., he or she was on the phone with another taxpayer)? How we can use technology to improve the corr exam process? For example, would making an appointment for an audit conference by video be better than an audit conducted by correspondence? So, please use the “Share Feedback” button on the  upper right corner of this page to send your suggestions. I will post the suggestions periodically and discuss them in my next blog.

Additional blogs from the National Taxpayer Advocate can be found at NTA Blog.