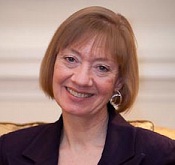 Nina E. Olson, the National Taxpayer Advocate (NTA) from 2001 through 2019, was the voice of the taxpayer within the IRS and before Congress. She led the Taxpayer Advocate Service (TAS), an independent organization inside the IRS that helps taxpayers resolve problems and works for systemic change to mitigate problems experienced by groups of taxpayers.

Throughout her career, Ms. Olson has advocated for the rights of taxpayers and for greater fairness and less complexity in the tax system. In calling for fundamental reform in 2012, she wrote, “A simpler, more transparent tax code will substantially reduce the estimated 6.1 billion hours and $168 billion that taxpayers spend on return preparation” and “reduce the likelihood that sophisticated taxpayers can exploit arcane provisions to avoid paying their fair share of tax.”

Ms. Olson was appointed to the position of National Taxpayer Advocate in January 2001. Under her leadership, the NTA’s Annual Report to Congress has become an important vehicle for change. It is one of two reports the NTA is required by statute to deliver each year, and outlines the most serious problems facing taxpayers. The IRS has implemented hundreds of recommendations she has made for administrative change. Members of Congress have introduced bills to implement dozens of her recommendations for legislative change, and 15 of them have been enacted into law. In June 2014, the IRS adopted the Taxpayer Bill of Rights for which Ms. Olson had long advocated, grouping dozens of existing rights in the Internal Revenue Code into ten broad categories of rights, thereby making them clear, understandable, and accessible for taxpayers and IRS employees alike.

Tax Analysts honored Nina Olson as one of ten Outstanding Women in Tax for 2016. This recognition reflects Nina Olson’s influence on the work of legislators, tax administrators and tax professionals across the globe. She gave the 2013 Woodworth Lecture, sponsored by Pettit College of Law at Ohio Northern University. Ms. Olson is a member of the American College of Tax Counsel and delivered the group’s prestigious Griswold Lecture in January 2010. The non-profit Tax Foundation selected her to receive its Public Sector Distinguished Service Award in 2007. Money magazine named her one of 12 “Class Acts of 2004,” and Accounting Today magazine has named her one of its Top 100 Most Influential People in the accounting profession each year from 2004 through 2018.

Prior to her appointment as the NTA, Ms. Olson founded  and served as Executive Director of The Community Tax Law Project, the first independent § 501(c)(3) low income taxpayer clinic in the United States. From 1975 until 1991, she owned a tax planning and preparation firm in Chapel Hill, North Carolina.

Read the The Tax Lawyer

“I am enormously grateful for the opportunity I have had to advocate on behalf of our nation’s taxpayers. Amazingly, despite the challenges of complying with our multi-million-word tax code, more than 150 million individual taxpayers and more than 10 million business entities do their civic duty every year by filing income tax returns with the IRS. That is an extraordinary achievement and one we should not take for granted.”